I kissed  a sailor and I liked it!

I started off celebrating Fleet Week on Friday at USMC Day at Battery Park. It was great- Full of good looking men in the crisp tan and blue uniform, as well as dress blues. There were US Marine trucks and tanks all around. They let me hold the machine guns, and were sweet about it too. I even got to see live demonstrations of different fighting tactics & techniques. While taking pictures with the Marines, one of the girls commented, “I love it when they flex,” to which they responded with  sexy grins, “We’re not flexing” which made me even more enamored. 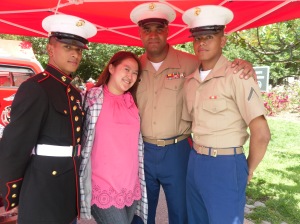 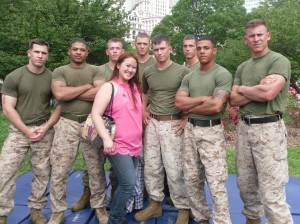 The next few days I went out to West Village, Meatpacking, Times Square and met some more US Navy and Marines. I had some great conversations with the them and did my fair bit of flirting.

On Monday, for Memorial Day, some friends and I did the free ship tours at Piers 90 & 92 of the USS Wasp and the USS Roosevelt. The Wasp was massive. We went on the flight deck and saw all different helicopters and pilots/technicians that built and run them.

I even a ran into the Navy cuties I met the previous night at Hotel Gansevoort Rooftop. When I mentioned to them that we went to Social after, they tried to assure me they went to look for the place on 48th and 8th ave and couldn’t find it. Oh well, it was great to see them again and had some time to chat more.  I even gave them the idea to display the special silver uniforms and let people try them. The Navy boys are pictured below:

I went to the lower level of the ship after chatting with the Navy boys. In this area there were tons of machine guns and different tanks on display. I climbed on top 1 of the larger tanks- They are really huge and high up.

Then we had  group guided tour of the USS Roosevelt, which smaller than the Wasp but still pretty awesome. Even though it was super hot outside, there was  lovely view from the ship of the Wasp and the open water. We climbed downwards in order to see special rooms, like the Watch (Navigation) Room and the Combat Room which were both so cool. We also got to see the board room, the Captain’s special state room, and the cafeteria. 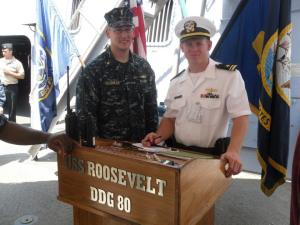 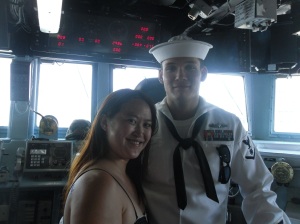 Thank you boys to another great Fleet Week! Have a safe voyage home, or to where-ever you’re going next as you sail away from NYC early morning tomorrow. Wish you could stay!

One response to “Fleet Week Festivities”