I received a hair cut from Bumble & Bumble Model Project. The style of the cut was layers with bangs so now my hair is slightly past my shoulders, which initially seemed like quite a bit cut off but have gotten used to it now. I also got my hair dyed a reddish brown color. Below, is the new color.

I finally had the chance to visit Empire State Building observatory deck for the very first time, with one of my friends who was able to get a discount for us. It was a breathtaking experience and I loved the gorgeous views of the city! And sunset which was absolutely beautiful, bathing the whole city in an orange-pinkish glow. This touristy activity is well worth it. 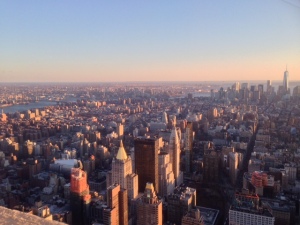 I attended the exciting Supreme Asian Chef Culinary Battle in Atlantic City (with free appetizers and drinks!) with a great group of people. There were six chefs total battling for two spots to compete in Las Vegas. We got to see the chefs cook up a storm, with amazing creations using the ingredients: Sea bass, mushroom and egg.

I had a chance to see the iLuminate Artist of Light Show performance, which got its beginnings on “America’s Got Talent.” It is a dance-in-the-dark adventure, with an electrifying mash-up of music, technology and illusions. It tells the story of an artist who has a magic paintbrush that brings characters to life, who inadvertently creates monsters who threaten to destroy everything he holds dear. Below, a photo of me with some of the cast members. 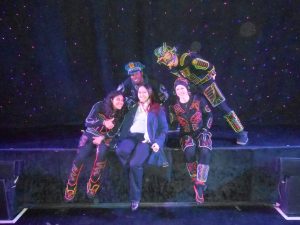 Spending the evening in Long Island, ice skating at Iceland Rink to popular hit songs was loads of fun then heading to the Cheesecake Factory, which is my #1 favorite chain restaurant. 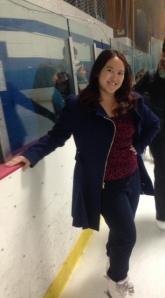 The Cheesecake Factory has an awesome menu and something new called “Skinnylicious” menu which is lower calorie items. I selected the steak medallions, which came with mashed potatoes, cherry tomatoes, asparagus, mushroom and red wine sauce. Absolutely delicious and fresh and at half the calorie count!

Getting to see Broadway musical, Beautiful – The Carole King Musical which “tells the inspiring true story of Carole King’s remarkable rise from teenage songwriter to the Rock & Roll Hall of Fame.” It was wonderful with an amazingly talented cast. I really enjoyed the bliss of hearing pop hits, such as “Some Kind of Wonderful,” “Will You Love Me Tomorrow,” “He’s Sure the Boy I Love,” and “You’ve Lost that Loving Feeling,” which all gave me the feeling to get up and dance! 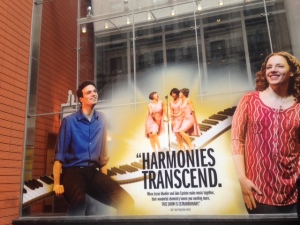 Attending an ElectroYoga Pop Up event, which got my adrenaline running as we paired traditional yoga moves and positions (as well as some interesting lifting and twisting of body) with fast beats and bass. After the workout, we had small bites: Fruit, popcorn, chips & hummus and vendors of sweet treats, chocolate, tea, makeup, clothing and free massages.

Live taping of “America’s Got Talent” auditions in Madison Square Garden, which is always a treat. It’s so much fun to see the acts, especially the amazing ones. I especially liked the opening act, a slew of Asian dancers in green who did this lovely Jasmine ballet routine that all the judges were awed by. Most of the other acts were just okay by comparison, but there were a couple of other decent dance acts, a singing act and a very unique & interesting one involving flying/lit up wooden animals that involved a bit of song and dance. Then of course there were a bunch of really bad ones, which was entertaining as well especially because they usually think they did pretty well. And I love seeing Nick Cannon and my favorite judge, Howie Mandel! I also knew the warm up comedian, Tom Kelly (from the days when I made my living attending television shows like “The Newlywed Game” and “The View”) and he actually remembered me by name! Always a pleasure to run into him.

Today, I had the chance to enjoy a cute little place called Just Sweet Cafe. It’s mostly desserts, some nice bubble tea options and a few appetizer and noodle/rice dish options. There wasn’t too much to choose from for the savory treats, so I just ordered the green onion pancake with curry. The pancake tasty- Very thin and extremely crispy- and not as oily as usually so that was a plus. Also the curry had a nice flavor to it and wasn’t at all spicy. It came with potatoes which was yummy.

Then I ordered a special dessert that consisted of Taiwanese shaved ice topped with green tea ice cream, condensed milk, red bean, mochi of varying colors, mango, strawberry and kiwi. Such a delightful combination of flavors, textures and colors! All the ingredients came together beautifully and the condensed milk brought everything together perfectly. It was delectable! 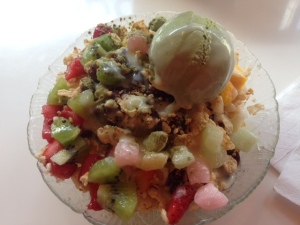