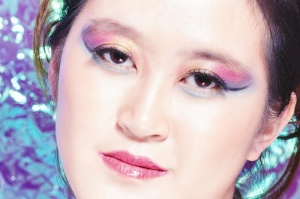 Last week I did a couple of beauty shoots with photographers I’ve worked with in the past, both complete with a makeup artist. The first shoot took place in Brooklyn but had my makeup done first at the Waldorf by my friend who has her own blog, Lipstick and Style. Our vision for this shoot was for a dramatic look with pinwheel color effect on the eyes and red lipstick. For the eyes, my friend used gold, pink, purple on top and a shimmery aqua blue on the bottom lid that I provided by Shiseido (hydro-powder eye shadow).

After the makeup application, I headed to the actual shoot where I met Tashi, an amazing hair stylist and makeup artist. He whipped my hair into a beautiful updo that involved volume, a bun and curls in about 10 minutes. He also added fake lashes to my look which enhanced my eyes. We took several different styles of photos, changing the angle, poses, expressions, background colors and textures, using bare shoulders.

Another beauty shoot I had was with a photographer and makeup artist in Long Beach where we tried out 3 different looks. The first one had a sort of “ice princess” appearance which consisted of white powder for the whole face, silver eyeshadow, pale blue topaz rhinestones in an upward swirl below each eye, and nude lips. We also added a star necklace hanging in the center of my forehead and elegant silver dangling earrings. For this look, we did some regular shots and then played with lighting – lens flare that added a sort of angelic quality to the images.

For the next look, I took my hair out of the updo and loved the high volume, curled big hair effect it had for the remainder of the shoot. The makeup artist used a light pinkish shade for the eyes and we kept the rhinestones on, then choosing a hot pink magenta lip. As a finishing touch, we added 2 swirls under one of my eyes.

The last look was the most sophisticated of the day with bright blue shadow on my upper lid and a sprinkling of glitter, and deep purple below, with a sort of cat eye liquid black eyeliner. The lip was kept simple with a reddish glossy sheen. I also used a glittery intricately swirled silver mask for some of the shots with this particular look, giving it an sexy intriguing feel. Also, I loved that my hair retained the high volume curled shape, so played with my hair quite a bit- hiding behind it, having it fall over both shoulders then one shoulder while trying to catch the best light.

One response to “Beauty Photo Shoots”