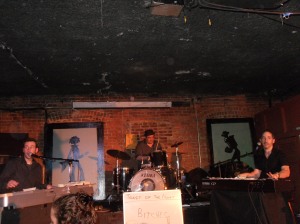 Tobacco Road features the original NYC Dueling Pianos show, Shake Rattle and Roll which is an all request rock and roll singalong where two guys sit across from each other on the stage, battling songs out on the piano (and singing them). The capable piano men play anything from Billy Joel to Lady Gaga, to Meat Loaf. They really do know every song.

I got to go with Random Events (where I’m an Assistant Organizer) to this crazy show and we were seated at the bar and in front. We were definitely a fun and spirited crowd. In the beginning of the show, we played a game on which side of the room was loudest, and since we were a raucous, vocal bunch it wasn’t hard to win.

The pianists played quite a few of 80’s songs. My personal favorites: “Jessie’s Girl” and “Take Me On.” Of course they also played the classic songs everyone loves: “Brown Eyed Girl” and Journey’s “Don’t Stop Believing.” We also heard “The Lion Sleeps Tonight” from Lion King which was awesome, “Faith” by George Michael, and a medley of Monkees & Michael Jackson songs. Plus much more of course.

Later in the night, I put in my request for Hanson’s MMMBop (thanks to my co-organizer’s funds)… I know most of you will groan when you hear the name Hanson, but it’s actually a really good song to play on the piano and sounded amazing live. And if you actually listen, the lyrics are wiser than you would think:

There were also many jokes and toasts. The pianists would ask us if we would like to hear a dirty or clean toast, and we would invariably answer “Dirty!”  However, my favorite toast was not a dirty one, but a sentimental one: “There are ships that sail, and ships that… But the best ships are friendships.” What a sweet and true statement.

The night was filled with karaoke-style singing along, dancing, toasts, laughter, screaming and more.

If you go, it is every Friday and Saturday night at Tobacco Road. $10 with a two-drink minimum and it’s a good idea to make reservations to ensure you have a seat as this show is almost always sold out. Also, bring some cash as you will have to wrap your song requests in money if you want to hear it.