I visited with two of my friends from my undergraduate school, UC Santa Cruz over the weekend. We were able to fit a lot into a couple of days. It was such a beautiful weekend, both in weather and company.

Supreme Court: The building is majestically made with marble columns with the words “Equal Justice Under Law” carved above; rich in ornamentation, and more than a little intimidating in stature and through knowing it is the “highest tribunal in the Nation for all cases and controversies arising under the Constitution or the laws of the United States of America.” We were actually able to go inside and explore a little bit.

When we first walked in, we saw a Supreme Court mockup, images depicting 75 Years of History and a chair surrounded by wood paneling with “Supreme Court Bar” etched on. There was also a statue of John Marshall at the end of the Lower Great Hall, and statues on the sides of the front stairway with one female figure (the Contemplation of Justice) and one male figure (the Authority of Law). Further inside we found the Great hall, which was a grand corridor leading to the Courtroom. Busts of former Chief Justices graced our presence on pedestals along the walls. Also beautiful were 2 marble and bronze spiral staircases.

The U.S. Capitol: Another magnificent building of great meaning and importance.

A fine example of 19th-century neoclassical architecture, the U.S. Capitol combines function with aesthetics. Its designs derived from ancient Greece and Rome evoke the ideals that guided the nation’s founders as they framed their new republic.

It looks even more decorated than the Supreme Court Building. The front of the building has a raised large section of glass that sparkles in the sun and resembles water. The Capitol Building has a gorgeous dome, marble terraces, columns, and though we weren’t able to go inside, just to see it and to stand on the steps was worth it.

Library of Congress: It is the oldest federal cultural institution in the United States and the largest library in the world in terms of number of books. This building is amazing and the interior is full of columns; white marble; staircases; colorful classical Renaissance-style paintings on ceilings and many other places; quotes about wisdom, philosophy & words; light from windows, stain glass windows and graceful statues.

National Gallery of Art: Lovely French paintings, fountains with flowers surrounding them, domes, white sculptures. The best part was chancing across a free concert in honor of the reopening of the 19th Century French Galleries. The concert featured a men’s choir and was so exquisitely beautiful. Another favorite part was this gold depiction of horse and men in war.

World War II Memorial: This was gorgeously laid out – All white and green with 56 granite pillars with names of U.S. states on them, arranged in a semicircle around a plaza and fountain with two arches- Atlantic and Pacific. The plaza is below the level of the rest of the site and contains a pool. It was a beautiful, moving, and emotional experience to see it.

The World War II Memorial commemorates the sacrifice and celebrates the victory of “the greatest generation.” Friedrich St.Florian’s winning design balances classical and modernist styles of architecture, harmonizes with its natural and cultural surroundings, and connects the legacy of the American Revolution and the American Civil War.

Kennedy Center: As we walked in, entering the Hall of Nations, I was struck by all the flags from different countries hanging up above… It was almost overwhelming. There is also a red drawing of a dragon– fitting as 2012 is the year of the dragon thought to be the most lucky and prosperous of all the Chinese Zodiac animals. We made it just in time for the free performance and this night it was the Children of Uganda Tour of Light 2012- Music and dance celebrating Uganda’s multiple and rich heritages. It was wonderful, vibrant, full of color, life and joy. The only drawback was that it was tough to see as it was so crowded.

Smithsonian American Art Museum/National Portrait Gallery: This museum, which we went to right after the Lunar New Year Festival parade, is huge with so much art to be seen! It seemed like there was room upon room, floors upon floors, walls upon walls of amazing different styles and displays of creative artistry. There was such an abundance of Paintings, sculptures, photographs, exhibitions and more. Some of the best artistic collections: Colonial, 19th and 20th Century, Multimedia, Crafts and Decorative, Works on Paper, and Contemporary. The collections captures the aspirations, character and imagination of the American people throughout the centuries.

One of my favorite parts of the museum, however, was not an actual artistic piece but a vast, open room/cafe area tucked inside that had the appearance of a quaint outdoor village, complete with high ceilings, outdoor light, trees, and pools of water. 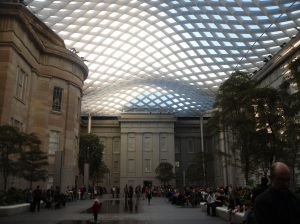 What a wonderful adventure to visit DC, the capital of the United States: So rich with history, beauty and an unparalleled record of the American experience. Next time, I plan to tour the White House during DC’s National Cherry Blossom Festival!