I had the opportunity to visit one of my friends in Seattle during New Year’s Eve weekend and had an amazing time exploring the city. We opted to purchase the Seattle CityPASS, which gave us admission to the following 5 attractions and helped us save 47%.

First, my friend and I headed to the Pier and the Seattle Aquarium.

One unique exhibit was the Underwater Dome, which is “an undersea dome with a 360º view into a mammoth 400,000-gallon tank filled with hundreds of Puget Sound fish,” such as salmon, lingcod, sharks, sturgeon and more!

I also liked the Pacific Coral Reef, which displayed gorgeous and colorful fish and coral in hues of pink, blue, orange and yellow.

The Marine Mammals exhibit was super cute and included playful sea otters, river otters, fur seals and harbor seals. Life on the Edge was really cool and gave us the chance to touch the sea life of Puget Sound tide pools… Everything from sea cucumbers, sea urchins, hermit crabs and sea stars!

After the aquarium was the Argosy Cruises Harbor Tour. It was lovely to see the different skyline and views of Seattle as the cruise boat traveled around the Puget Sound. Our tour guide was wonderful and shared a lot of interesting information about Puget Sound and about Seattle as a city. For example, even though stereotypically Seattle is thought to get a lot of rain, Seattle is not even in the top 5 cities in the U.S. that receives the most rainfall. However, Seattle is one of the top foggiest cities in the U.S. 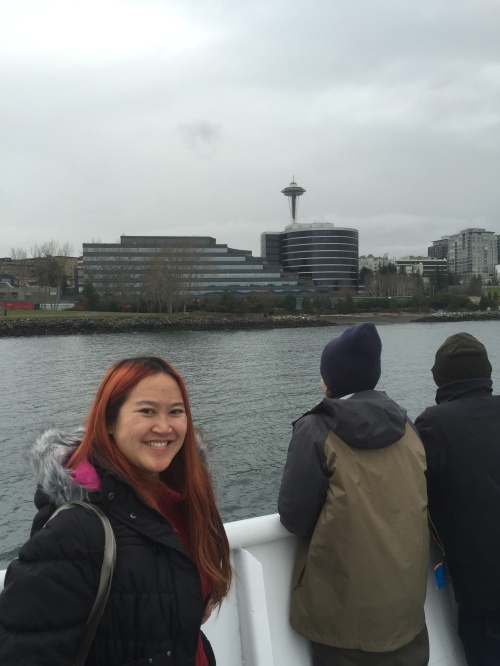 I loved Pike Place Market, which is a public marketplace, kind of like a massive and bustling farmer’s market with all kinds of specialty items: “Within the nine-acre historic district you’ll discover dozens of farmers, a bustling crafts market, and more than 200 unique owner-operated shops. There are more than 80 restaurants to tempt you, from take-out counters specializing in donuts to fine dining establishments.” I had a great time sampling delicious fruit, jams, honey, chocolate pasta, vinegar, yogurt and much more! 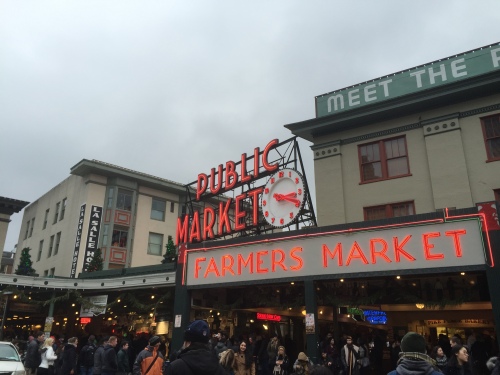 The Gum Wall wasn’t on my list of things I needed to see, but since it was right near Pike Place Market, we passed through and it was an interesting array of different colored chewed up pieces of gum covering the brick walls.

Chihuly Garden and Glass was one of my favorite attractions while visiting Seattle. This place features the work and designs of Dale Chihuly’s breathtaking blown glass masterpieces and is right near the Space Needle (in fact, there is an amazing view of the Space Needle in the outdoor garden area).

Within this museum is the Persian Ceiling (one of my favorites) where the entire ceiling is covered with brightly colored and lit plant/flower-like designs. The entire room is lit up in white, pink, yellow, green and it is an amazing sight to behold! My friend was impressed by the lighting, while I marveled at the incredible artistry of the beautiful glass above me on the ceiling. 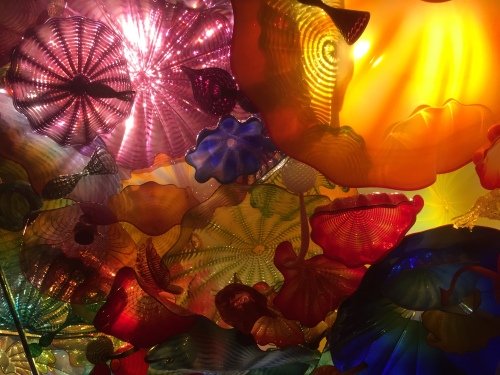 After that, there is a room filled with huge yellow flat flowers; tall red, green, purple, blue reeds and a massive structure with hot pink bottom and yellow top reaching and curling in all directions. This led to the Ikebana and Float Boat (another favorite), which showed of two botas. One had multi-colored and different shaped balls in and around the boat, while the other had a hodgepodge of plant/flower-like and wavy lines in brilliant bright hues of the rainbow. This was made even more incredible with the stark black background. 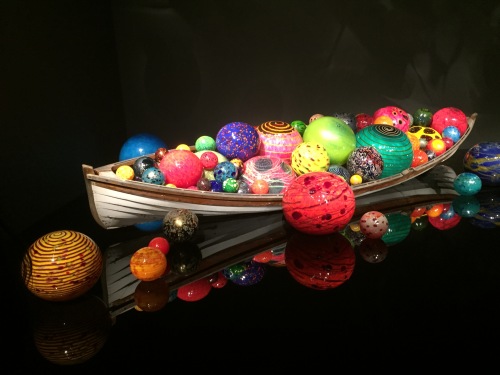 My absolute favorite part of the entire place was by far the Glasshouse, where there was an incredible display of orange, yellow and reddish flowers on the ceiling – All made of clear gorgeous glass, against the lights and high glass dome. 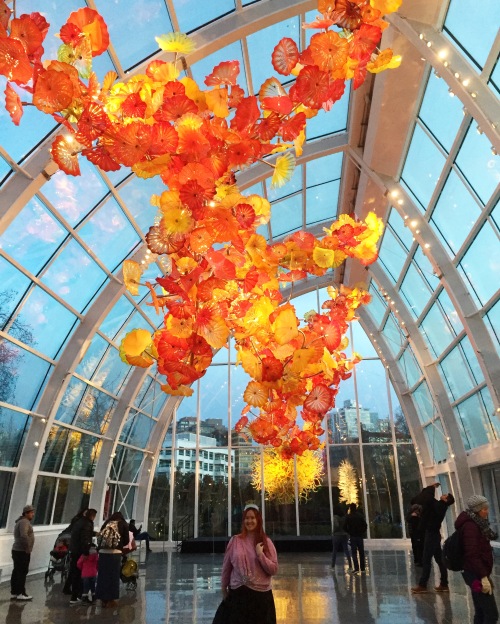 Venturing outside, there are lovely glass within the real garden. There were tall candle-like structures, huge balls, more twisty designs and I liked the part with a symphony of blue hues the best.

In the evening, before heading to the Space Needle, we stopped by Kerry Park and got to see a spectacular view of the entire city of Seattle, with the Space Needle being front and center.

The Observation Deck at the Space Needle is 520 feet high and has a 360 degree panorama of Seattle and it is so beautiful to see all the lights of downtown Seattle. The view was truly breathtaking.

We decided to check out the Space Needle when it was light out so that we could experience the view in the daylight. Luckily, it was a clear day out so we were able to see everything, from the snow-topped mountain ranges, Elliot Bay, Puget Sound, the buildings and sights of downtown Seattle. 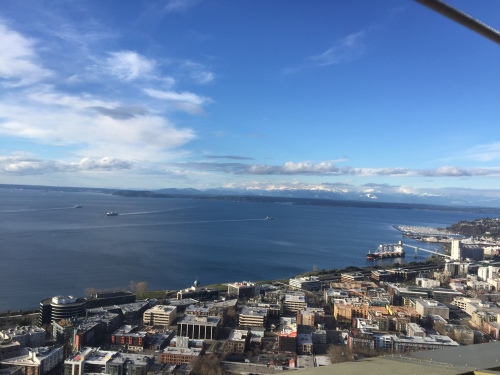 The last stop was Museum of Pop Culture (MoPOP) which was awesome and fun. The current special exhibit is “Star Trek: Exploring New Worlds” and costs $5 to go through it.

My favorite exhibit (no longer at the museum) was “World of WearableArt,” which featured mannequins sporting a pretty glittery pink gown in glass material, a red convertible, a Gothic church building and other equally unique outfits. I also really enjoyed the “Fantasy: Worlds of Myth and Magic” exhibit because it transported me to a different and magical world. There was memorabilia from The Wizard of Oz, The Princess Bride, Harry Potter, Lord of the Rings, Game of Thrones and Chronicles of Narnia. Another exhibit of interest to me was the “Can’t Look Away: The Lure of Horror Film,” which includes “a laboratory-worthy wall of artifacts holds a plethora of film props that include the Nighthawk stake from Buffy the Vampire Slayer, the axe from Stanley Kubrick’s The Shining, and the facehugger from the 1979 Alien.” We also checked out: “Infinite Worlds of Science Fiction,” “Indie Game Revolution,” and ones for Jimi Hendrix and Nirvana. 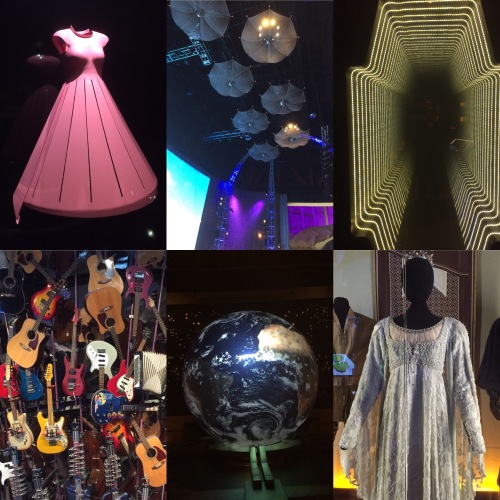 I truly enjoyed experiencing what Seattle has to offer and found it to be a lovely and charming city with great character. 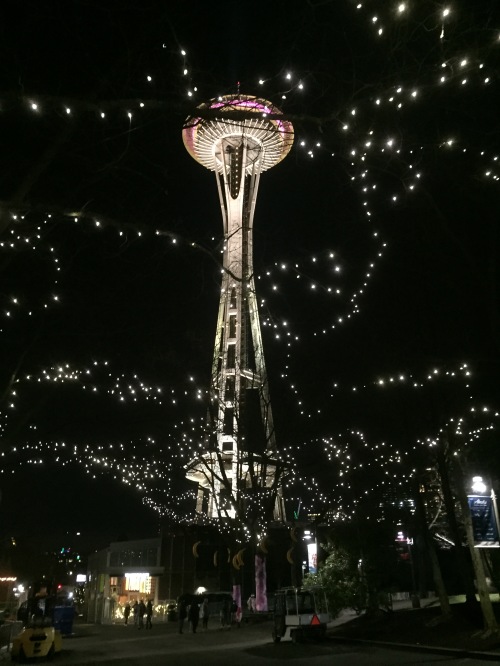