I recently received a gift card to Otto Enoteca Pizzeria (thank you, Chris!), one of my favorite Italian restaurants in the city. “Otto Enoteca Pizzeria is modeled after an Italian train station and located on 8th Street, in the historic One Fifth Avenue building,” … at the edge of Washington Square Park in the heart of Greenwich Village. Upon being seated, we were given a large, thick piece of bread wrapped in white paper and a packet of long bread sticks. The bread was decent, but would have been nice to have butter or olive oil and vinegar.

It was tough choosing between Spaghetti Alla Carbonara and one of the pasta specials, which contained radicchio, pancetta and gorgonzola. My friend and I ended up sharing, so I was able to have the best of both worlds.

The pasta special was pretty good. The radicchio (leafy purple-ish vegetable with a slightly bitter taste) was a bit wilted but I liked the pancetta. The gorgonzola was overpowering though. Overall, this dish was a bit too rich for me.

I liked the Spaghetti Alla Carbonara better, which had pancetta, scallions, black pepper, and egg. The pasta was cooked al dente, there was just enough black pepper (and salt), the pancetta added a lot of delicious flavor, but I couldn’t really discern the taste of egg and the consistency was a little gummy. 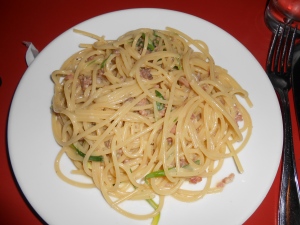 Then, of course I had to get dessert! I’ve had the Olive Oil Coppetta before and it is incredibly delicious, but wanted to try something different so went for the Parfait Carotina, which is described as “carrot & cashew cake, cardamom orange caramel, ricotta crema, cashew brittle, carrot orange marmelatta, cardamom orange gelato.” It was completely different from what I was expecting… There were grated carrots on top of the cake and the gelato didn’t have a strong flavor of either cardamom or orange, though I did like the cashew brittle. The flavors were ultimately not pleasant enough for me enjoy, so I switched my order to the Black & White, which did not disappoint.

The Black & White was truly delectable. It was a beautiful concoction of milk chocolate chip gelato + chocolate sauce (the Black), crème fraiche gelato (the White), and hazelnut croccante, topped with caramel crema and a crispy waffle wedge. While the caramel crema had a delightful light flavor of caramel, it was too much to eat just by itself. However, when combined with the rest of the dessert, it added an extra layer of deliciousness. The crème fraiche was light, fresh, divine and the milk chocolate (with actual bits of pure chocolate) was rich, creamy, wonderful, while the sugary crispy hazelnut brittle added a satisfying sweet crunch.

It is a testament to the quality of this restaurant that I’ve come back to dine here several times. Also, the service is quite good and the prices are affordable. 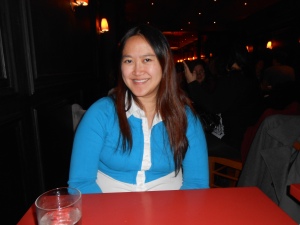