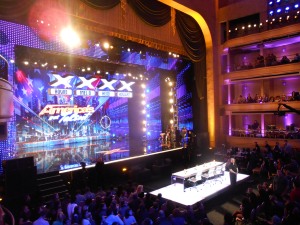 I had the pleasure of attending the last night of NYC auditions to upcoming “America’s Got Talent,” Season 8 which was a night of absolute excitement and true talent. There are 4 judges this time around: Howie Mandel, Heidi Klum, Mel B (Scary Spice of Spice Girls) and Howard Stern. And the ever charming and ever hilarious host, Nick Canon! The photo below shows them in the outfits that they were wearing for the taping I attended. 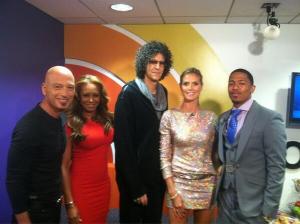 Howie, I love and he always makes me laugh. Heidi is gorgeous and glamorous, but I didn’t find her comments and critiques to be that compelling. Mel B was personable and definitely spoke her mind. While she garnered boo’s from the crowds because she was being honest and saying something negative about the contestant,  I found that I agreed with her the most. Howard, I’m not his biggest fan but I respect his opinion and he’s quite fair actually.

For those who watch this show and love the auditions, SPOILER ALERT. I will go into detail about some of the performances.

There were also two comedians. Both went through, one of them is the wife of comedian Tom Cottor, who almost won last season’s “America’s Got Talent.” She is lovely and dressed sharply. Did she make me laugh? Not really. Mel B agreed with me and was a NO but the others were a yes.

The GOOD started off with a lovely Chinese couple in a red/black costume who performed this amazing unicycle dance act that made it look like they were figure skating. Next came a group of 7 dancers dressed in all black with gas masks. My first reaction was that they looked scary, but they totally wow’d me with their moves. And when they took off their masks at the end, there was a cool surprising reveal which you will have to see for yourself when they air the auditions on television!

Then there was the quartet of great looking guys playing violins while singing popular songs that I was looking forward to seeing the whole time. We had seen them practicing before the show and they sounded incredible. Unfortunately, when they came out for the real audition, they didn’t impress until the last couple of seconds when they did the chorus, singing “You love, you love, you love…” That swelling of harmony and violins was so beautiful and the judges loved that part but it came too late. So, they gave them another chance. All they had to do was do an extended version of that last chorus but they picked a Maroon 5 song. And not the chorus. So all the judges X’d them this time. However, Heidi wanted to give them one last chance. If that is the case, my dear, do not hit the button like you did! 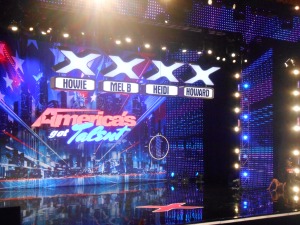 I will end with The AMAZING acts. Two of them consist of shirtless men. Just a coincidence. =) Christian, a sexy Asian did this performance with straps, lifting himself in the air with straps hanging from the ceiling… It was incredibly fluid and wonderful.

But my favorite performance of the evening was by these two gorgeous men who were clearly in love and very emotionally connected to each other told us they were a couple. They performed what they called an “aerial love dance,” using the hoop hanging from the ceiling in the above image. The performance was pure athleticism, gracefulness, and beauty. At one point, one of the them is holding the other by his feet. And all of this was done high up in the air. I was deeply moved and so was everyone in the audience, as well as the judges. Below, is an image of the contestants warming up before their act! 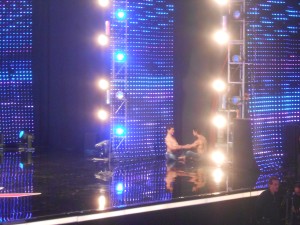 When someone commented that they will not go far in the competition because they made it clear that they are gay (with the caveat that New York is different and all of us loved them here), I got to thinking,  is that true? To think that America, the supposed land of freedom, will not vote for contestants just because they are gay makes me quite upset. Contestants who clearly have an immense amount of talent, ability, charisma (and were so sweet and loving to boot!)… By far the best act of the night… So I can’t really speak to whether the statement is true, but I am hoping that America will prove it wrong. 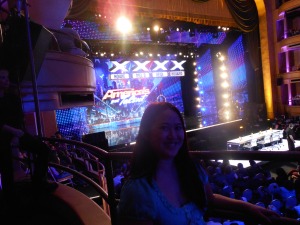 Enjoy these auditions starting June 4, 2013 on NBC… May the best talent win!