Last week I attended the USA-Japan Music Goodwill Concert at the most prestigious concert venue in the world, Carnegie Hall. We got complimentary tickets and got to sit in the 2nd Tier which was a great view and not too high up.

Around 150 Japanese ladies were flown to Carnegie Hall to perform. They were wonderful, and looked beautiful in perfectly tailored purple gowns.

The first part of the concert was the Goshiki Sakura Story Suite where the Japanese ladies sang in their own language. It was beautiful and the subject matter was “A Story of Five-Colored Cherry Blossoms.” Most of the songs were sung by the entire choir, with dancers in traditional, lovely and very colorful Japanese kimono garb, scarves, parasols and other props. The dancing coincided with the topic of the songs and were so graceful. During some of the songs, a soloist came to sing an aria, which sounded both wonderful and haunting (in a good way).

Here were some of my favorite lyrics:

Through cold winters they endured
and bloomed in joy of life.
Our dreams came true in cherry colors,
and so are the sky and our hearts

After the Cherry Blossom themed songs, more Japanese performers came out with instrumental music from Japan using the piano, flute and ocarina. This was complemented with a drummer, and Japanese ladies kneeling on the ground on red mats and doing crazy cool movements and twists with props. 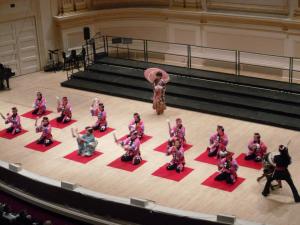 We also heard the Japanese choir sing some great American songs. They had changed into gorgeous flowing dresses of blue, almost royal blue- just a tad lighter. They did selections from West Side Story: Tonight, I Feel Pretty, America and One Hand, One Heart, as well as “A Spoonful of Sugar” and “Chitty Chitty Bang Bang.” It was delightful and charming to hear their versions, and loved the ending when they cleverly transformed into a car for “Chitty Chitty Bang Bang” and left the stage in that way, smiling and waving.

We heard from the Westchester Chordsmen after that, which was a real treat. They sang some great songs, such a “Oklahoma!” “Summertime” “God Bless America” with gusto and heart, charming us with their strong voices and lively formations that mirrored the words and sentiment of the songs. They also sang “Prayer of the Children” which is the song used for special, serious occasions such as the 9/11 commemoration, memorial service for the Columbine High School tragedy, and for a concert in memory of the Oklahoma City bombing. This rendition was emotional and heart wrenching.

The finale was when all the performers, from the Japanese singers and dancers to the Westchester Chordsmen to sing “New York New York” and was just magnificent and a feast for the visual and auditory senses.