Sunday night concert at the Barclay’s Center in Brooklyn, headlining NKOTB and featuring 98 Degrees and Boyz II Men turned out to be more than I bargained for, in more ways than one. Even though I went mostly for 98 Degrees, NKOTB put on a lively eye-catching show with great music and cool dance moves.
Boyz II Men was the first band to perform, and all 3 members were dressed smartly in white. My favorite song that they sang was “Water Runs Dry” which showcased their smooth deep voices and perfect harmonies. I also enjoyed “On Bended Knee” beautifully, with red roses and yes, on bended knee.
Next, 98 Degrees came out in all their handsome boy band glory decked in jeans and a vest, which they soon enough shed off to reveal their buff muscle figures in white tank tops. They sang all of their hits and sounded amazing. I was especially jealous when they each brought a girl on stage to serenade them “I Do (Cherish You),” hugging and putting their arms around them throughout.

There was a short break, then NKOTB came out and thoroughly entertained us for the next 2 hours! They managed to do quite a few costume changes seemingly on the fly and used raising platforms that made the stage look like a spaceship; fire; falling sparklers; big white balloons; neon flashing lights of blue, pink, green, yellow…

They also gave energetic dancing, pelvic thrusts, revealing abs and chest, as well as Donnie’s out of the blue make out session with a fan while he was writhing around on the floor of the stage. Their songs were catchy and fun, and some of their slower, more romantic ballads really showed that they (Jordan Knight especially, who was my favorite) could sing.

I enjoyed it when they took the time to slow down a little, with an acoustic band and do an acoustic medley with snippets from hit songs, such as “Single,” “I Remember When” and “Tender Love.” Then, amped it up a little with “Hot in Here” and paid tribute to New York with a cover of “Empire State of Mind” which earned thunderous applause and singing along.
Also, since it was Father’s Day, Joey McIntyre came out with his little blond grandson (I believe),who cried out, “What’s up Brooklyn” to all of us and was too adorable singing and dancing with the rest of the boys for one song.
Here is a Set List of the entire concert, courtesy of NKOTB News Blog. 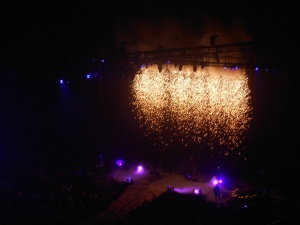 Afterwards, my friend and I headed out, a little surprised that we had so much fun and a bit giddy from the excitement. As we were exiting, I felt a sudden headache, my legs felt weak and I was unable to walk straight so I grabbed hold of my friend who led me to sit down by the stairs. The attendant radioed for security, who brought me to the EMT who took some quick tests and suggested I go to the hospital to get checked out. I finally decided I should go and thankfully my friend rode with me in the ambulance and stayed by my side the whole way through, which was such a comfort, providing me with good conversation, making me laugh and sharing healthy snacks.

The folks at the emergency room joked that it must’ve been Nick Lachey (98 Degrees) or Jordan Knight (NKOTB) taking his shirt off that caused this… After several tests and a CT scan, everything looked fine and the doctor told me that vertigo may have been the cause of my sudden headache.
After a day of rest off work, I feel much better now and despite the hospital visit, had such a great time at “The Package Tour” Concert, and I wouldn’t have missed it for the world! 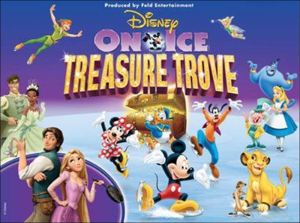 A couple of weekends ago I headed over to Brooklyn and went with my friend to see “Disney on Ice: Treasure Trove” at the newly opened Barclay’s Center.

We had dinner first at SkyIce, known for their Northern Thai Home Cooking as well as homemade ice cream. I had the Non Fried- Fried Rice which came with shrimp, chicken, peas, mushrooms, pineapple, tomatoes and green onion. It was pretty tasty, but had a slightly spicy flavor that I could not place. We also tried some of their homemade, organic ice cream. I had Caramel Sea Salt and Honey-Ginger, and both were absolutely delicious. The caramel ice cream had a sweet strong caramel flavor, while the honey-ginger ice cream was delightfully subtle, both flavors melding together in exquisite taste.

Afterwards, we walked the short distance to Barclay’s Center, which is a wide and expansive building. The exterior itself isn’t the most beautiful or ornate, as it is rust colored but the interior is quite spectacular. We got inside and were bombarded by concessions at exorbitant prices, such as popcorn for $12 and cute Disney paraphernalia such as little Cinderella slippers, Disney Princess necklaces, adorable cups with Princesses on them!

We finally got to our seats and had a decent view of the entire ice rink. The show started right on time, and started with warm up skating with the characters from “The Incredibles” and figure skaters in neon colors. After that, Mickey Mouse, Minnie Mouse, Goofy, Donald Duck came out to introduce the show and show us the treasure chest of Disney stories.

The first story was Alice & Wonderland, which started with the Rabbit being late and took us through the entrance of the Queen and the croquet game. It was pretty well done, humorous and Alice did a wonderful job. 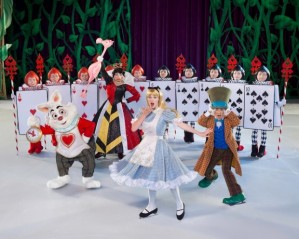 The next tale was Peter Pan, where they showed several long scenes, from Captain Hook coming in on his huge ship, to Wendy singing about about what a mother means, to Wendy and the boys being captured, to Tinkerbell telling Peter Pan about the capture, then back to Wendy being captured by Captain Hook and on the verge of walking the plank, all the way through to Peter Pan saving the day and Captain Hook being eaten by the humongous crocodile!

After the intermission, it opened up with Lion King right away, which I absolutely loved. They went through the whole story, starting with Rafiki holding Simba up, then came Simba’s song, “I Just Can’t Wait to Be King.” Next was Mufasa’s version of the same sentiment, then the intense scene of the stampede of the wilderbeests and the tragic death of Simba’s father, which was blamed on Simba by the nefarious Mufasa and which led Simba to run away, meeting Timon and Pumba and their rendition of “Hakuna Matata.” However, my favorite part was when Simba and Nala came together to do the heart stirring “Can You Feel the Love Tonight.” Their pairs skating was amazing and I could feel the chemistry between them. It was just fiercely moving and fiercely beautiful. Lion King ended with the couple ruling over their Kingdom, and all the animals dancing around them. 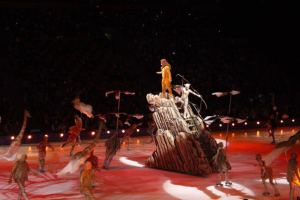 Next was the first story that Disney ever made, Snow White. This one was charming and playful.  And Snow White was perfectly lovely and graceful. After that was Aladdin, which was colorful and thoroughly enjoyable. It shows the Aladdin meeting the Genie, the royal procession of Price Ali on his elephant to impress Princess Jasmine and the magic carpet ride, singing “A Whole New World.” I loved the song, and the skating between the two was sweet and romantic.

Little Mermaid (one of my favorite Disney movies) was way too short, with only one song: “Under the Sea.” Not the song I would have picked. I also didn’t think that Ariel was mermaid-y enough and there was something about her that I didn’t quite make me believe her as Ariel.

Then there was the new story of Rapunzel from Tangled. This one was quite fun, as it showed Rapunzel meeting Flynn for the first time and Flynn taking her to see the floating lanterns in the night sky, which was magical and wonderful. Flynn was very handsome and their pairs skating was energetic, graceful and delightful. 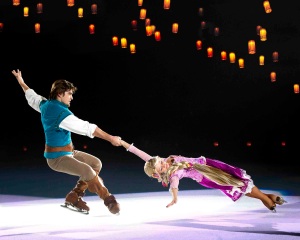 Last was the story of The Princess of the Frog, showing Princess Tiana and Prince Naveen in their heartfelt dance.

In the finale, all the Princess and Prince couples from the show came waltzing out, along with other classics, such as Cinderella in that gorgeous sparkling white blue gown, to Beauty and the Beast which are the two that should have been included. There were also fireworks and sweet ending of Mickey and Minnie getting married!

While I have to admit that the Peter Pan story was well acted, I would have preferred it if Disney on Ice: Treasure Trove didn’t spend quite so much time on Peter Pan and Alice in Wonderland and focused on a few more of the Classics, but all in all a solid performance with gorgeous singing, amazing costume designs, poetic figure skating and delightful Disney stories.