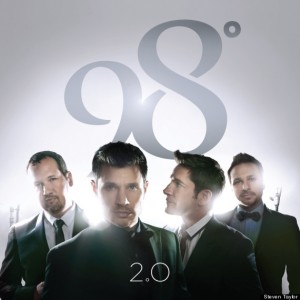 Yes, 98 Degrees, the boy band that brought us hits such as “Hardest Thing,” “I Do (Cherish You)” and “Because of You” is back with a new CD, “2.0.” So when I heard they would be making an appearance at the Apple in Soho, I knew I had to be there. I got there only a few minutes before they were set to appear, so I had to stand the whole time in the back, but I still managed to get a decent view of the group.

They still look deliciously swoonworthy, especially Nick Lachey and Jeff Timmons. They still have that tight muscled physique, charming smiles and a sweet demeanor. I smiled, waved a blew a kiss at Nick from across the room and yes, he smiled and waved back!

The event started off with a moderated conversation with Cubby from KTU, with questions about what made the boys come back together again, where they’ve been living, what the boys have been up to and so on. Nick is busy being a new father; Drew participated in (and won) “Dancing with the Stars” and became a host for the show; Justin ran for mayor of Cincinnati; and Jeff was hosting Chippendale’s in Las Vegas… aka being a stripper (not really, but we wish) — He did pretend to take off his button down shirt and do a little dance for us though. So adorably sexy!

Next was the Q&A from the audience, which was fun but the part I loved most was when they performed a few of their hit songs throughout the years… Their special performance was heartfelt, beautiful and amazing. Nick’s voice was deeply velvety silk smooth and undeniably sexy. Jeff’s voice was a bit higher, still rocked it.  All the voice harmonizing together was a real treat. 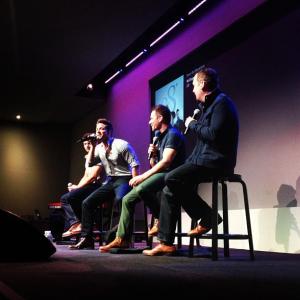 The Play List
1. “Invisible Man” – This was gorgeous sounding… Pure perfection!
2. Then what they called The Sunshine Song- “Because of You”
3. Continuing with one of my personal favorites, “The Hardest Thing,” which almost made me cry…
4. Another sappy love song, but with the opposite message of the one prior, “I Do (Cherish You)”
5. “Una Noche”
6. And the latest hit from their newest album, “Microphone” (uptempo, incredibly sexy and got us all up dancing)

Afterwards, I headed outside to the back door to see if I could meet them, but turns out they were signing autographs and taking pictures with fans inside the Apple store and security wouldn’t let us back in. So we waited, and still got a chance to get autographs and pictures. I managed to get a picture with all of the members, but not all together. in one photo. Still, much better than nothing! I loved that they were so sweet & great about it, and made it clear that it was “because of us,” that they loved and cherished us all! 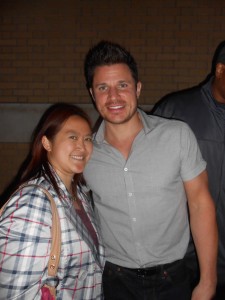