I managed to get discount tickets to the US Open and went for the first time this past week. And what a beautiful night it was! We were seated up high in section 311, which was actually quite a good view.

The first game was Maria Sharapova versus L. Dominguez and it was really not a fair match because Sharapova was so much better. She definitely dominated the tennis court and looked beautiful doing it. Afterwards, there was a short interview with Sharapova, and she was both engaging and charming.

Next was Olympic Medalist, Andy Murray versus Ivan Dodig. They were better matched, thus this game was more exciting, but Murray reigned superior, as expected.

I had a wonderful time! Really loved being able to witness the games live, and being so close to the action! 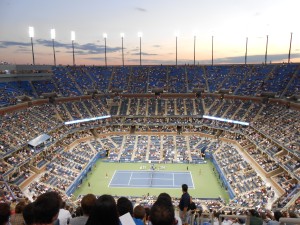 Tagged as tennis, US Open

One response to “US Open”