This past weekend I had the pleasure of attending Club Getaway Young Professionals Weekend with some friends. I was able to get a ride there, instead of taking the bus, which was great because I got door to door service–  Picked up and dropped off right at home.  Driving there also allowed us to get to Club Getaway earlier so that we could enjoy the happy hour under the Olmypic theme decorated tent. There was plenty of variety: Fruits, puff pastries, taco and mashed potato bars, cheese and crackers.

A little while later was dinner, which was a lovely affair. My only issue is that they always serve the same dishes for Friday night dinner: Salad, rolls, roasted potatoes with zucchini, peppers, tomatoes and some kind of chicken which was good the first time, but wasn’t so appetizing the 3rd time around. At least the dessert was tasty – Yellow cake with strawberries and whipped cream.

After eating, my friend and I hung out with some of the guys we met at dinner, then hung around outside – It was a beautiful, cool night. And there was a dance party in the Boathouse so that was fun. We also spent some time by the lovely gazebo and met more people, including a really drunk guy who was having a hard time holding a coherent conversation, but was quite hilarious. He was clearly interested in me and something might have happened if he wasn’t so intoxicated… At least we were entertained. 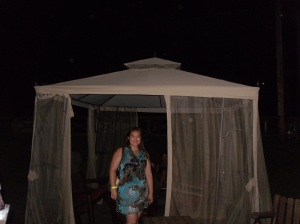 Saturday we got up nice and early to sign up for select activities, and for breakfast. I did the early morning stretch, and Beginning Fighting- Stunt Workshop with Alfredo, one of the Club Getaway volunteers who actually does this for a living. We learned how to punch, pull someone’s hair and drag them across the floor, choke, gouge someone’s eyes out- All pretend. The only thing that was missing was kicking.

I had signed up for trapeze early in the day, which I was terrified of but decided that I really wanted to try it because 1) I’ve always wanted to do it and 2) It’s really expensive to do elsewhere. However, it started to rain pretty badly halfway through so I didn’t get to my turn.

Instead, I ran into two of my friends who were on their way to archery and was about to join them, then decided to take the van into town since my other friend was heading that way. The little town of Kent is really cute and adorable. We chilled in the Kent Coffee & Chocolate Company and I got a delicious handmade Popsicle of blackberry lime, as well as some chocolate bon bons of unique flavors, such as chai, bacon, peanut butter & so on.

Once we were back on Club Getaway premises, I decided to see if I could try the trapeze now that the rain had lessened. There were a few people waiting, but I managed to get there in time to be in the line up.

When it was my turn, I felt ready until I started to climb that really high ladder- It was quite wobbly and I got pretty scared, but the ladies at the top were really encouraging and helped guide me up to the platform. I was already incredibly shaken from the climb, so it was hard for me to stand on the edge and try to reach for the bar, which I felt was quite far from me. The 2 ladies up there were a huge help, as they soothed my nerves (a little) and held on to me as I tried to grab the bar. I managed to get one hand on the bar, then quickly placed my other hand on it, did a little hop and I was flying through the air! It was incredibly terrifying, yet incredibly exhilarating at the same time. I swung a few times, and finally heard “And drop” which I couldn’t do because I was too scared (even though there’s netting to catch my fall) so I was led down slowly then had to slide down a pole to get to the ground.

I felt such a sense of accomplishment and pride for being able to face my fear and actually trapeze! One of the guys watching from below took some pictures, so they will be posted later.

After that exciting moment (that my friends all got to witness), we headed to lunch which is probably the best meal at Club Getaway, just because of the sheer variety of foods and desserts that we can choose from. There is pizza, taco bar, many different and delicious types of bread, turkey and stuffing, pastas, and so much more. As for dessert, there is ice cream (of course), a chocolate fountain with strawberries and marshmallows, cookies & cakes galore. 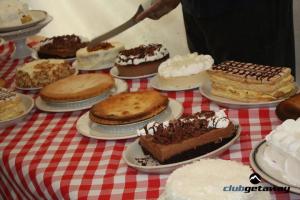 So after lunch, I was all prepared to do water skiing, swimming in the lake, slip n slide but nature had other plans for us… It started to rain again! So we headed to the Boathouse where there were a slew of activities. I played some poker, then Flip Cup which I’m quite good at – and it was a great way to meet some cool people. Then, my friend and I joined in a fun game that was a bit revealing but all in good fun.

The weather started to get better later in the afternoon, so my friend and I went down to the lake to do the Pontoon boat ride, and I got my very delicious non-alcoholic Mudslide drink. The boat ride was nice, if a bit on the slow side but with beautiful views and a relaxing feel.

I was a little upset though because I missed one of my favorite activities, karaoke which took place in a different location than usual. I had really wanted to sing my favorite duet, “Summer Nights” with Ajax (who actually remembered me from last year’s Club Getaway weekends!)

Dinner was nice- With all of my roommates together, and getting to meet some new guys. There was salad, roasted potatoes, huge pieces of broccoli, chicken (again!) but was seasoned quite well, and beef which was delightfully tender and full of flavor.

Right after dinner, we enjoyed and danced to the music of live band, Radio Riot. They played some really great songs, like my absolute favorite, “Jessie’s Girl” and “Rolling in the Deep.” I went up to dance in the front, with a bunch of different groups, singing along, jumping high, and generally having a good time.

After the live music, my roommates and I headed back to our cabin to get ready for the End of the World party. I wore my pretty black dress with colorful flowers on them, green glitter, nude sparkly lips and silver platform sandals. The party was rocking with great music & beats when we got there, but was entirely too hot and stuffy inside. 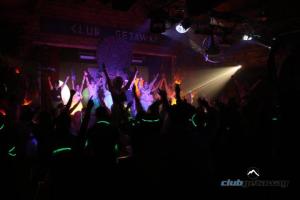 So we found some mutual friends, and hung around outside for awhile. As soon as we saw they were setting up for the campfire, we went down there right away to get good seats around the fire. S’mores (mmmm) are my other favorite meal at Club Getaway… Perfectly melted burnt marshmallows with sweet chocolate and graham crackers.

I also loved hearing and singing along with Dave and his guitar, doing such favorites as “Bye Bye Miss American Pie” and “Cecilia.” We stayed by the campfire for quite awhile, then rejoined the End of the World party at the Boathouse and ended the night by the campfire.

Sunday dawned bright and early, felt much harder to wake up but we managed to get up early enough to be the first few in line for the ever popular omelets that are made right in front of our eyes. I had ham, peppers, onion, and cheese in my omelet and also grabbed a little waffle, which is another popular breakfast staple, along with bacon, hash browns, and strawberries.

I knew I wanted to spend time in the lake, since I didn’t get the chance yesterday (as it was raining most of the day). I also wanted to try water skiing, even though I should’ve taken that time to do arts & crafts or archery because I ended up spending quite a bit of time just waiting for my turn to water ski and when it finally came, I wasn’t able to do it for very long until it started raining again…

At least I got a ride in the water ski boat, and then went to swim in the lake.
I went up on the floating trampoline and managed to climb all the way to the top of the slide, thanks to a really sweet guy, and we slid down together, holding hands. It was a bit scary, since it was so high up but totally worth it.

After that, I wanted to just chill at Lakeside Live, but went into the Boathouse where they were starting “Wild & Crazy Game Show” which I just had to be a part of… We were the Teenage Mutant Ninja Turtle team and did pretty well. Some of what we had to do: Have 1 team member wrap up the rest of us with toilet paper, and we won for being done first. Then there was the crazy building a wobbly cup tower, while one team member tries to bounce the ping pong ball into the cup (being held by another teammate) & each subsequent time, place the cup with the ball in it underneath. We won that round as well. Ultimately, we got 3rd Place- Not bad.

Then it was lunch time, and it came right on time. There was so much to choose from- Stuffed salmon, baked potato bar, pizza, chicken soft taco, pesto pasta, sweet fried chicken, and so on.

After eating, I said my goodbyes to the people I had met, and my friends and I made our way out. And I got a ride to my apartment, which was much needed as I quite tired, with a headache and stomachache… Too much fun and good food, I guess!