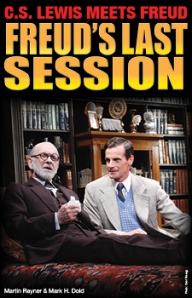 Earlier this week I got to see Freud’s Last Session for free with a friend.

In this play, Freud invites a young C.S. Lewis to his London home and they end up discussing and clashing on many different topics: The existence of God, love, sex and the meaning of life.

The dialogue was sharp, intense and kept us on our toes, made us think. The acting, by both men was superb and each brought believability to their character. Freud, played by Martin Rayner, depicted Freud well as an older gentleman with strong notions and hints to his philosophy. C.S. Lewis, played by Mark H. Dold, was handsome, idealistic with a very charming accent. Both managed to bring in facial expression, body language, and idiosyncrasies for their respective characters.

Though the play is low on action, as it is mostly a conversational debate, there are moments of humor. There were also moments of true passion and conviction, giving color to the performance.

As the meeting goes on, we see Freud’s health condition get progressively worse, signifying that it is toward the end of Freud’s life, which is a bit disturbing. But of course it makes sense, hence the title “Freud’s Last Session.”

Also, the set design was lovely- Freud’s study, filled with books, a desk, china, odds and ends of Freud’s collections, a space where folks can lay down and be “analyzed” and a large window to the side, letting in natural light and giving the room some cheer.

“Freud’s Last Session” is not for everybody, as some might find it boring but it is well written, well acted and quite an interesting discussion on some of the biggest topics in the world, between two very famous people in history.