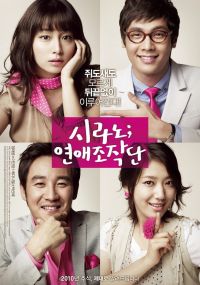 Last night, I enjoyed Cyrano Agency, a hilarious and touching romantic comedy at Korean Movie Night taking place at Tribeca Cinemas. This movie takes a page out of the more well known tale of Cyrano de Bergerac, who believes he is too ugly (he has a prominent nose) to make the girl of his dreams fall in love with him. Cyrano hides behind a handsome man (Christian) and lets Christian woo the girl using Cyrano’s romantic words.

Now, the Cyrano Agency consists of 4 people who help their clients win the woman (or man) of their dreams. “The company intricately devises and implements schemes, custom tailored to match the interests of their intended target” and they have a 99% success rate. However, their high success rate is in danger when a sweet but awkward hedge fund manager wants to capture the heart of the head of Cyrano Agency’s ex (whom he is still in love with).

Within Cyrano Agency, there was a lovely romance that built slowly between the two main characters which was refreshing and enjoyable to watch. It was full of ridiculous plot twists that had me literally laughing out loud; endearing heartwarming moments; interesting and engaging dialogue; beautiful stars and a fitting end. 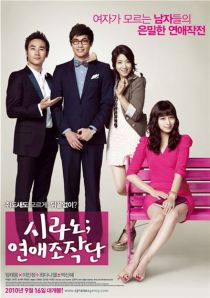 2012 Korean Movie Night “Series II: It’s a Fine Romance!” continues at Tribeca Cinemas every other Tuesday over the next few weeks. The next movie is My Girlfriend is an Agent on March 27 at 7p and the last film in the series is Petty Romance on April 10 at 7p.

If you go, there will be a line so try to get there around 6:30PM. Also, know that the movie theater is a little on the small side and it gets crowded quickly. We managed to get decent seats, but weren’t able to all sit together.