Park Avenue Winter is unique and special because it changes its menu and interior decor each season. Currently, the design is an elegant interpretation of winter: Silver and white, lights, stark tree branches, and warm brown accents.

It is also one of the many restaurants that I’ve been dying to try and this Restaurant Week, they only participated for weekday lunches. I didn’t think I was going to be able to make it, but Friday is my half day and I managed to find someone who wanted to try it as well and we made it there on the very last day of Restaurant Week.

The waiter started us off with bread: Winter Brown Bread and Fresh Chive Brioche. Both were very different from one another, and very tasty. The Winter bread was filled with golden raisins, sunflower seeds, oats and walnuts. The flavors were a bit much, while the Chive Brioche was more salty and tasted strongly of onion. The only criticism is that we only received one piece of each bread.

For the appetizer I chose the soup which came with coconut-chicken dumplings which were served alone and the waiter poured the warm soup over it at the table. That was an interesting and engaging way of presenting the dish, but the soup was just okay. There were strong lime and Asian flavors but didn’t pleasure my taste buds as much as I hoped.

As for the main course, I was having trouble deciding between the pork chop, salmon or chicken. I finally decided on the salmon since I hadn’t had it in awhile. The salmon was beautifully presented but the Berkshire Pork Chop that my friend ordered was definitely the larger and more hearty meal. Thankfully, my friend let me try some of the pork chop which was delicious. The sauce of maple cider syrup was delightful.

My Organic Scottish Salmon was also made quite well, despite the disparity of size. In fact, I would say it was exquisite. It came with a maple brown butter that worked well with it and the salmon flaked off easily. Also with the salmon were sunchokes- it was my first time trying them and they are reminiscent of potatoes. The sunchokes tasted great with the salmon and they were perfectly crisped and slightly brown. 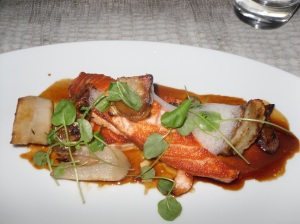 I was considering the ice cream and sorbets for dessert. The Chocolate-Tea, Brown Butter, Tangerine and Bartlett flavors looked enticing, but I decided on the Frozen Banana Parfait after I learned it was a special treat only for Restaurant Week. Though I was a little apprehensive about ordering something with banana, which is not my favorite fruit, I needn’t have worried. The chilled banana had an almost ice cream-like consistency and there were chocolate crumbs underneath, as well as creamy, sticky sweet butterscotch at the bottom. The parfait came with a chocolate-y biscuit as well and everything blended together sweetly and deliciously.

The Park Avenue experience was great, and I would definitely come back to try other seasons- Both to taste what new menu items they have cooked up in the kitchen and see how they have changed the interior to match the season.