I found out about this free dance performance taking place in Flushing Town Hall, celebrating the Lunar New Year through a friend. Though it was a bit of a stressful journey to get there- the bus wasn’t running on its usual route and we hit heavy traffic- I still managed to get there in time and was not disappointed by the show.

Our host for the show was extremely endearing: Outgoing, funny, and seemed to be drunk with happiness and good cheer. We were able to see traditional dances from different cultures around the world that also celebrate the Lunar calendar. The first dance was of Mexican origin and more of a processional where all the male performers were decked out in larger than life, gorgeously sequined headdresses and colorful, lively costumes. It was a dance to celebrate nature.

Next, there was a traditional Thai style dance. The Thai dance was punctuated by swift, stiff movements that require much precision and skill. The costume for the dance was gold, white, and red and sparkled beautifully. 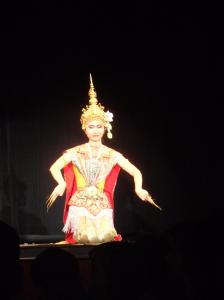 One of my favorite dances was from Taiwan, and was reminiscent of a Jasmine flower. This solo female performer was full of charm, grace and loveliness. The dancer used a beautiful feathery white fan as a prop and had on a light green outfit, accented with red, gold, blue and white. 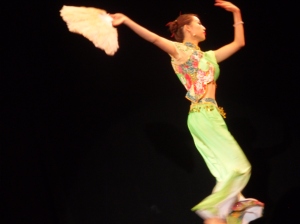 We also got to see performances from NY Step, Korean drummers, children as well as Chinese and Indian cultures. NY Step started off with the grown ups and they were a little all over the place and disorganized- both in costume and dance moves. However, they had a little surprise for us and we got to see younger generation from the team execute a more synchronized performance displaying fancy and fast footwork that was quite impressive. It was very high energy and fun.

After that, we enjoyed the Korean drumming group which was comprised of two men and one woman. They were dressed in blue and white, and kept a great beat even when they threw their drum sticks in the air and showed off their ability.

Next were two women in that showed off a traditional Chinese folk dance, called “The Peacock Dance.” In this version, one woman was dressed in all black with gold, green and brown accents and the other is dressed in all white with purple, blue and yellow accents. The peacock is considered a symbol of happiness and good fortune. The dancers were quick and agile; making many hand postures to imitate a peacock.

With graceful and dainty postures as well as subtle emotional expression, peacock dance is a crystallization of wisdom of the Dai people with comparatively high artistic taste. 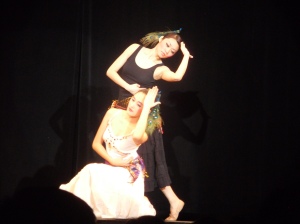 There was also an Indian traditional dancer with green dress and full skirt who did many twirls and spins around which was very pretty to watch. After that, three adorable children in pink costumes skipped out and played around, jumped over each other, all with much energy a big smile on their faces. Another highlight was a comedic performance by a drag queen in a sparkling long silver dress, singing sad traditional American and Chinese songs. Her movements, emotions, facial expressions were highly exaggerated, and caused us all to laugh heartily.

The Lunar New Year Dance Sampler ended with a bang! showing off the Mexican traditional dance, imbue with much color, sequins, music and high spirits.

Although I would’ve liked to see a couple more traditional Chinese dancing performances, the Lunar New Year Dance Sampler show was such a treat, and a groundbreaking departure from past years (before there were only Asian-style dances).